Mike Ellis (@MarketerMikeE) is a guy whose blog I read and who I have followed for quite some time now. He is an awesome man of God who frequently blows my mind with his ability to act on the needs he sees. I wish I was more like him, in many ways!

Mike uses Twitter for marketing and he wrote the following post a few days ago on his blog and I asked him if I could share it with you all. Don’t switch off just because he’s in marketing, there’s some really great stuff in here: 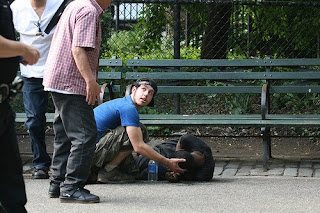 I am a large, un-hip 48 year old guy. I have been involved with “marketing and promotion” since I was 19 years old. I am not an extremely intelligent guy. I barely made it through high school and I partied my way through college. I didn’t walk out with a degree but I did become an expert at drinking beer. At first, this whole social media marketing thing seemed a bit overwhelming. Why? I’m the dude voted most likely to think that “The Dukes of Hazzard” was a documentary. I just learned to use a fax machine within the past two years. But with a little bit of patience, learning and following Twitter rock stars, I am now consulting and advising businesses, pastors and churches who want to get started on Twitter.

I admit it. I have become a huge fan of Twitter. Some call me a “Twitterholic”. One of the reasons I like Twitter is that it’s one of the greatest places to share and give to others. Many businesses get on Twitter and forget that it’s called “Social Media Marketing” for a reason. You’re on Twitter to be “social” not to serve up large portions of “spam”. It’s not called “Spam Media Marketing”. I “tweet” this on a regular basis on Twitter: “Why do we market to others with the same tactics that we despise?” I like this Twitter phrase, “Tweet unto others as you would like to be Tweeted.” It doesn’t take a rocket scientist to see that the more you give and share on Twitter, the more successful you will be. You shouldn’t get on Twitter with the mindset of “how much can I get today”. Instead say, “How much can I give and share today”. You will see success coming to you naturally when your goal on Twitter is to share advice, answer questions, encourage others and give without any intention of getting anything in return. Let me give you some examples of giving and sharing on Twitter.

Twitter Whiz Kid, @unmarketing, has nearly 36,000 “tweeps” who follow him on Twitter. His Twitter bio says, “Stop Marketing, Start Engaging.” I got a Blackberry Curve for Father’s Day. I sent a “tweet” to @unmarketing. I asked him what he thought was the best Twitter App for Blackberry Devices. He instantly sent me a return “tweet” that said, “Hey, I love UberTwitter on my Blackberry but let me ask others and then have them get back to you.” Immediately, @unmarketing sent out a “tweet” asking his followers to send a “tweet” to me with their opinions. I received over 200 responses. UberTwiter won hands down as the crowd favorite. Today, my Blackberry Curve is sporting UberTwiter and works great and allows me to “tweet” from my phone. @unmarketing shared and gave without expecting anything in return.

When I speak to business people about Twitter and they are NOT on twitter, I say this, “If you are a business and you are NOT on Twitter, you should have your head examined!” I was @DailyGrindDB’s customer before I became their Twitter consultant. I convinced @DailyGrindDB (a coffeehouse in Daytona Beach, FL) that they should get started on twitter. I helped set up their Twitter account. I continue to advise and consult them on a regular basis. Since they were my first client, I didn’t charge them for my services. I knew that if I gave to them without expecting anything in return, success would come to me naturally. It has. Since I started working with @DailyGrindDB I have been featured in newspaper articles, started work with new Twitter clients and I have been asked to write articles about Twitter and marketing. @DailyGrindDB loves Twitter too. Their presence on Twitter has brought them 75 to 100 new coffee drinkers in just 3 months. Even race car legend and announcer Kyle Petty (@kylepetty) found @DailyGrinddb through Twitter and made 2 visits for coffee in one week. @DailyGrindDB is constantly telling others about how their work with me has brought them success. My success today happened because I gave and shared without expecting anything in return.

Long before Twitter I learned a valuable lesson from Frank Mercer. Frank and I went to the same church. One evening I was leaving the church after a special event and literally bumped into a family down on their luck in the parking lot. I asked them what they were doing. They said, “We’re waiting for Frank.” Soon after that Frank arrived with some cash he pulled out of a nearby ATM. He gave the cash without hesitation to the family. The family thanked Frank and left the parking lot. I was blown away. At that time in my life I would never give something to complete strangers, especially cash. I asked Frank how he could give to strangers so freely without any hesitation. He said, “Mike, I don’t ask God whether I should give. I ask Him how much I should give.”

Join me in doing something radical today. Share and give without expecting anything in return. Then take it to the next level. Intentionally, give and share something with a complete stranger who may or may not ever pay you back.