I love it when people ask me “Is this OK as a guest post?” because my answer is almost always “Duh, yeah.”

My philosophy of guest posts is simple: I want to show how wonderfully unique the different members of the Church are. If you feel that a post is representative of you then, providing it’s not profanity laced, libelous or for some other reason unacceptable, it’s exactly what I’m looking for!

This week’s post, by Brenda Coats of Prairielady fame (Blog, Twitter) is one of those posts and my answer is YES, Brenda, it’s EXACTLY what I’m looking for!

So, without further ado… I give you…

I have prayed many times for good gifts from the Lord. That they would be given to my children. And by good gifts, I don’t mean fancy jobs, cars, or any other material possession. I mean talents. Fruit of the Spirit. The things that matter in life, and that can be used for His glory.

Ashlee has the gift of caring for others.

Jessie has the gift of music. Both singing and playing the piano.

And Andrew has the gift of pitching. Not with his voice, like his sister. But with his arm.

His baseball tournament was this weekend. We were excited just to be able to go to tournament, since we are now in an age group that requires you to earn that right. The top eight teams get to go, whereas when they’re younger, each team went regardless of standings. I believe we came in fifth overall to win our tourney spot.

We didn’t end up winning clear through to the final game. But we did win the first one.

I’m not going to lie. I wanted needed our team to win that first tourney game.

Because I am way too competitive, especially when we face a jerk we were going up against a team with a coach that, in my opinion, shouldn’t be allowed to coach.

He’s rude. He’s mean to the kids. He causes a fuss with the umpires nearly every game, and sometimes even manages to get himself kicked out of the game.

And each time we play his team, we lose!

Not because they have so much more talent, but because his little mind games tend to do quite a job on the players. Both his and ours.

So I, in all my fleshly desires, wanted this win more than anything.

Then I repented of trying to bribe the Lord.

See what I mean by train wreck?

Andrew pitched the first four innings. His buddy, Dalton, pitched the last three. To make a long story short, both of our pitchers did exceptionally well, and we ended up winning 4-3. It wasn’t a slaughter. It wasn’t easy. But we they got the job done. 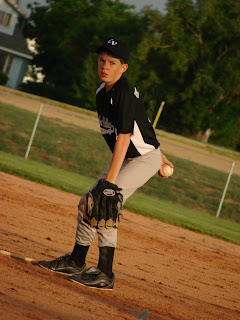 But you know what?

Although I wanted this win more than anything, I made up my mind that if they lost, it would still be ok.

Because Andrew did his best. The whole team did their best. They fought hard. They persevered. They didn’t let that coach’s attitude get to them. They stuck together until the end.

Watching Andrew pitch is one of my very most favorite things to do. He does have a gift that has been given to him by God. And I’m so thankful that he uses it. He doesn’t hoard it (although he’s been tempted at times). He shares it. He gives back a portion of what he’s been given.

It’s good and right for him to do that. God gives us good gifts so that we may humbly share them with others.

I see the appreciation in the eyes of his teammates. I see his coach’s admiration. But what I appreciate most about Andrew and his gift is that he’s humble about his ability.

Could it be that he isn’t really aware of the depth of his talent?

I believe that’s part of it.

But if he were desperate to be the top guy, the one who was admired, the one everyone looked to for leadership … I believe he would see his talent more clearly. In other words, he’s not looking to be puffed up and made great. He just goes out there and does what the team needs him to do.

And they love him for it.

So I publicly thank the Lord for giving Andrew a good gift. For enabling him to be a humble leader that is not selfish with the talent God has given.

And for a wickedly fast pitch that causes his mama’s heart to flutter each time she hears the smack in the glove, followed by a … 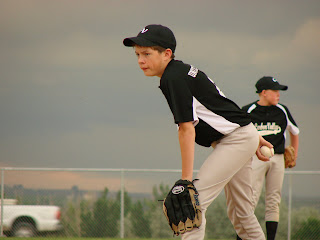